This morning the delivery company had the good mind to give the landline a try and we were going to town anyway and picked them up on the way. So after the jobs in town I came home and did the whole unboxing thing.

I had a bit of an advantage in that there were two computers to unbox and set up. Cool, I can make mistakes on the wife’s and mine will be perfect (don’t tell her that). So I unboxed the “ruby red” version that Kate got, set hers up and got onto mine. No major dramas with hers at all.

Pictures are good and I took some, check out the whole unboxing there. The model that I purchased was a Dell Inspiron 1720, 2.4Ghz processor, 3 Gig of RAM, Audigy soundcard, NVIDIA 256mb 8600M GT video card and TV tuner. That’s the basics of it.

I was expecting to have a laptop full of crapware, but to my surprise there was not much at all. The major one being IE and that was gone as quick as I could download Firefox. IE did have Google Toolbar, which is not a big deal. There is a trial of McAffee Security Center installed. Again not a big thing, I am actually giving it a try because it is there, seems to be doing the job and it is not as if it is Norton. Plus there was the usual stuff from Dell that you might expect and in fact you don’t have that much choice about. Again OK by me and not irreversible.

One thing I had to get used to was Vista. Now I feel kinda dirty saying this, but Vista has it’s good ponts. For example connecting wirelessly to the Internet was as easy as pie. The interface is pretty much XP but prettier. But there are some nice gems among the nice graphics. Such as uploading pictures from my camera. Again very easy and straight forward. I really do like the way that Vista handles images, having them sorted into dates and tags turns what used to be a complete mess into something actually useful. I have not found the UAC to be as annoying as I thought it would be either.

I have to admit that my bashing of Vista was unwarranted in the generalized fashion that was prone to doing. I said I would never get or use Vista. This time I was not given a choice. I am kinda glad that I had no choice. Sure Vista has issues but so does every operating system, the ones regarding Vista are not as bad as people would have you believe. Sorry but I am yet to find a “puke” factor to Vista. I still might and I’ll be the first to let you know.

One peripheral purchase that was a real winner was a Logitech V450 mouse. I still work faster with a mouse and I am using the trackpad as well. But this came in handy when I wanted to feel more at home on the laptop. Setting up was quick and easy, batteries, wireless USB and done in about 1 minute. Only one criticism is the hardness of the scroll wheel button, otherwise a real winner.

Well I am going to enjoy the blogging from bed that I will now be able to enjoy. I am pretty satisfied with Dell and the new laptops. More configuring tomorrow, no doubt that will go on for a week or so. Feel free to ask me anything about the laptop or Dell in the comments!

Not a huge player of chess. But this is chess with a difference.

In this version of chess you play as you would expect, but after you take your go the computer starts to calculate it’s move. Normally when this is happening you wait around, not with the Thinking Machine. Lines start to draw all over the board while the computer calculates 1000’s of possible moves and future plays. You keep playing until you loose, or at least that’s what I do.

Interesting concept and makes for interesting waiting time. The pieces are not the usual representations and this makes it a little more difficult (I lost my queen because of this). I could not tell you how good a player the computer is because I am crap. I am also not sure what the transparent circles are surrounding the board while you are thinking. 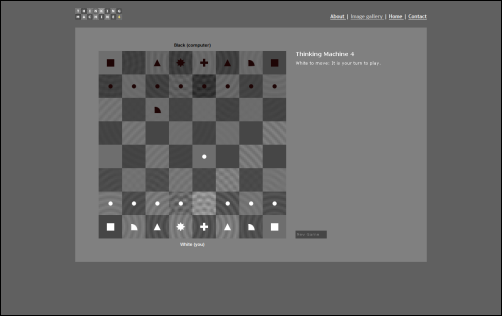 Still I think it is worth a look at the Thinking Machine 4 just because it does something that I have not seen before, even if you don’t play a whole game.

“Those traces become a key to the invisible lines of force in the game as well as a window into the spirit of a thinking machine.”

Not a Good Week

Well I am back from the rebuild and you might be thinking, “damn that was a long time”. Well yes it was, if a re-install of Windows was all that I did. To cut a long story short; when I tried to reinstall XP the motherboard died. So that was a bit of an issue. What I have been doing is building my new PC from scratch, but I have a great new system and I love it. But that was not all that happened, here are the dramas that occurred this week in short:

The motherboard dying was a no-brainer, new PC. Stupid trying to replace it as the technology has moved on and it was good to get current. The new PC is dual core Intel and is very zippy. Motherboard is a Gigabyte and has all the usual options. Although I lost the AGP slot, which means I had to give up my nVidia 256 graphics card. I am on internal graphics at the moment but I’ll get a card at some point. The RAM is 2 GB of DDR2 and is excellent. Everything loads fast and smooth. Standard DVD, CD drive and covers all the formats you would want. The hard drive is a 320 GB SATA Western Digital. The extra size is very handy and I don’t think that I’ll run out of room any time soon. Tack on an Audigy sound card and a Firewire card and that’s about it. No it is not a high end tricked out gaming machine, but that is not what I do. Plus I like my money in my pocket.

One thing that really ticked me off is the fact that the SATA drives do not come with a power cable. It seems that this issue falls into the same category as printers. They can’t decide which manufacturer’s responsibility it is to supply it; the motherboard company, the case company or the hard drive company. Me; I think that if you are forking out a couple of hundred bucks for a drive then they should be dishing out the gear you need to connect it.

The USB hub died for no apparent reason. After the build we were plugging in all the hardware and we could smell something electrical burning and pulled everything out. After some sniffing we found that it was the USB hub. Browned off because it was only about six months old! Can’t find the receipt… Got another one.

The headphones were on their way out anyway. Decided that since I was spending the college fund I would get a really decent set. I settled on a pair of Sennheiser HD 215’s. Absolutely love them! The sound is awesome and they are light. The cord is a spring type, but the kicker is that it is fully replaceable. I hate the spring type, it gets in the road all the time. Plus I like to be able to walk to the fridge. They cover the ear fully and block out about 80% of normal external sounds. The added comfort of the full ear type will be welcome for those long edits. The phones are not top of the line but I think they are a great middle of the road. Great quality but short of the high end $250+ variety.

The microphone thing… well. There was nothing wrong with my Shure PG48, until the youngest child decided to test the limits of the $200 dollar boom arm it is mounted on. He found the limit of the boom arm and the whole shebang went base over apex onto the floor. Don’t worry the fall of the boom was broken by the mic (the mic is actually the cheaper of the two items). The result was that the mic was buggered, it still “worked” but there were issues such as dead spots, muffling and a loss of dynamics. Que the purchase of one brand new mic to replace the one that was not quite 12 months old.

To top it all off the printer died tonight, the podcast was not fully uploaded to the FTP server and I am not sure what else can go wrong in actual fact. I know there are things much worse. I would rather not find out what they are.

This is a photo of the internals of the new PC. We forgot to take progressive build shots. I spent ages on the cabling as the case has a perspex side and top. But I think the results are worth it.

See You on the Other Side

I have been putting this off for quite some time. My humble PC is in dire need of a rebuild. I have put it off and put it off until I can no longer ignore it. The frequent error messages and faults and bugs have risen to the point where I can no longer truly trust it.

The latest and greatest problem is that the damn thing will not shut down on the first request. All it does is shut down the running applications but it remains on at the desktop. Other than that I am getting exception errors and program faults, especially when they are shut down. Not sure why that is but then it is Windows and I don’t think that we are supposed to understand it.

This week is the perfect opportunity due tot he fact that we have not got a show this week. We also thought that with Easter, we deserved a week off and time to catch up with our families and friends… me, I’ll be working! But once the show returns the week after this one, we have a couple of exciting developments to tell everyone about as 2007 rolls on by.

Tonight I am on the prowl for those elusive files that you seem to always miss or forget that you needed and loose in the format… I hate that. But I have had some great tips and applications that are going to help me out. Such as MozBackup. This little utility will back up your profile in both Firefox and Thunderbird (plus the many other suites that are available). Plus everything with it including bookmarks, mail, contacts, history, extensions, cache and so on.

To tell the truth I am dreading it. Wish me luck and I will see you on the other side!

Oh… and if I am “missing” you will know why!