POPURLS is a great news aggregation site that I have talked about before. When I first saw POPURLS I was impressed by the slick coding and ease of use that this site oozed. I still am that impressed and enjoy a visit from time to time. Since I use a stand-alone application for reading feeds I don’t have much cause to make regular visits. But it is still a pleasure to take a trip.

So I noticed that POPURLS has a new feature, or it is more like a new related site. Called POPURLS.TV. It is yet another Google Maps Mash-Up that tracks in real time the stories that users are clicking on the POPURLS homepage. There is a list view at the top of the page that gives you the top stories over the last hour, the last 24 hours and the last 78 hours.

You can also switch the font size size and also the background colour if you please. Nice features. The listed stories are clickable as you might expect. Watch in Full Screen if you please as well.

Another voyeuristic look at the world I guess, but it is nicely done in typical Thomas Marban style and that is nice to watch. As good a reason as any to check it out. 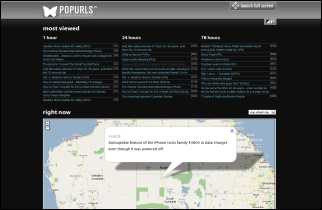 Thomas Marban; who I can only assume is the author of POPURLS left a comment on my last entry. I went and checked out his blog, amazing.

Thanks Thomas for the comment, nice to know my ranting is being read by someone. I took a look at Thomas' site and it is very nice. Think minimal, 2.0 niceness. It is simple and yet functional. On first glace I thought "what the?", I actually thought that I had a bit of comment advertising. But I stayed and clicked a few of the headings, while obscure I found the blog easily enough and found it easy to read. The thing I like about the whole site is that it is unique and not your average blog. I would not expect it to be given he wrote POPURLS! He is also obviously heavily involved in web design. Perhaps the reason I thought it was a bit of corporate work is the fact that the world is not used to seeing a blog that is as polished as this one and perhaps I will not make assumptions in the future.

I urge you to go and have a look at what the future of Blogs might be like and have a poke around, I liked it but it might not be everyone's "cup of tea". Nice work Thomas. That's if you want the opinion of a small time blogger! I could only dream of a site that went anywhere near the quality!

I was cruising the RSS today and although I had heard of POPURLS in passing I had not visited it until today. I was pleasantly surprised.

This site is a sort of a aggregator for sites that are updated frequently or have RSS feeds associated with them, or some other kind of community contribution on a regular basis. POPURLS summarizes this data into a “all-in-a-view” style. I don’t think that it is everything that comes out of these sites but it is a nice summary. The site has a very nice single page design and you can swap the default white on black to black on white. You can also make the text larger for those of you who are blind. The other cool option is that you can expand the headings to include more feeds or data. Lastly you can hover over a title of an article you get a summary of the article, click on it and a new tab opens with the full text from the site, cool.

You will notice that not all the “feeds” are text based. There are video feeds as well and that’s something that average newsreaders don’t do. I think that is a nice addition, so is the fact that there are Flickr photo’s as well. I am not sure what the relationship between POPURLS and the contributing sites is but it makes you wonder how others might get on the list. Just something to think about.

That aside I think this is a great idea and one that finally puts RSS feeds into the hands of “regular” users. While it does not unleash the true power of RSS and aggregation it is a taste and might spark some interest for some people, it also connects you with the information that may enable you to better utilize RSS fully. In addition to these points, even if you were a super geek; it is just a fun site and a great way to have a quick catch up with what is going on in cyberspace and beyond, a cool distraction from whatever it is you are meant to be doing. Have a look you will end up staying a while.