Not a Good Week

Well I am back from the rebuild and you might be thinking, “damn that was a long time”. Well yes it was, if a re-install of Windows was all that I did. To cut a long story short; when I tried to reinstall XP the motherboard died. So that was a bit of an issue. What I have been doing is building my new PC from scratch, but I have a great new system and I love it. But that was not all that happened, here are the dramas that occurred this week in short:

The motherboard dying was a no-brainer, new PC. Stupid trying to replace it as the technology has moved on and it was good to get current. The new PC is dual core Intel and is very zippy. Motherboard is a Gigabyte and has all the usual options. Although I lost the AGP slot, which means I had to give up my nVidia 256 graphics card. I am on internal graphics at the moment but I’ll get a card at some point. The RAM is 2 GB of DDR2 and is excellent. Everything loads fast and smooth. Standard DVD, CD drive and covers all the formats you would want. The hard drive is a 320 GB SATA Western Digital. The extra size is very handy and I don’t think that I’ll run out of room any time soon. Tack on an Audigy sound card and a Firewire card and that’s about it. No it is not a high end tricked out gaming machine, but that is not what I do. Plus I like my money in my pocket.

One thing that really ticked me off is the fact that the SATA drives do not come with a power cable. It seems that this issue falls into the same category as printers. They can’t decide which manufacturer’s responsibility it is to supply it; the motherboard company, the case company or the hard drive company. Me; I think that if you are forking out a couple of hundred bucks for a drive then they should be dishing out the gear you need to connect it.

The USB hub died for no apparent reason. After the build we were plugging in all the hardware and we could smell something electrical burning and pulled everything out. After some sniffing we found that it was the USB hub. Browned off because it was only about six months old! Can’t find the receipt… Got another one.

The headphones were on their way out anyway. Decided that since I was spending the college fund I would get a really decent set. I settled on a pair of Sennheiser HD 215’s. Absolutely love them! The sound is awesome and they are light. The cord is a spring type, but the kicker is that it is fully replaceable. I hate the spring type, it gets in the road all the time. Plus I like to be able to walk to the fridge. They cover the ear fully and block out about 80% of normal external sounds. The added comfort of the full ear type will be welcome for those long edits. The phones are not top of the line but I think they are a great middle of the road. Great quality but short of the high end $250+ variety.

The microphone thing… well. There was nothing wrong with my Shure PG48, until the youngest child decided to test the limits of the $200 dollar boom arm it is mounted on. He found the limit of the boom arm and the whole shebang went base over apex onto the floor. Don’t worry the fall of the boom was broken by the mic (the mic is actually the cheaper of the two items). The result was that the mic was buggered, it still “worked” but there were issues such as dead spots, muffling and a loss of dynamics. Que the purchase of one brand new mic to replace the one that was not quite 12 months old.

To top it all off the printer died tonight, the podcast was not fully uploaded to the FTP server and I am not sure what else can go wrong in actual fact. I know there are things much worse. I would rather not find out what they are.

This is a photo of the internals of the new PC. We forgot to take progressive build shots. I spent ages on the cabling as the case has a perspex side and top. But I think the results are worth it.

The other day I was talking about the release of Skype and the subsequent slow boot times that were occurring after installation. I have fixed the slow boot times but not the RAM usage and I am getting into Skypecasts a bit more but there are issues with that as well.

I put my slow boot times down to installing and uninstalling a few applications that we were testing. So I thought that to clean up and defragment the harddrive might be a good idea. I did both these things overnight. The other thing that I did was to set Skype not to load at start-up. The result is that the system is as fast as it ever was, I have less errors in general and the boot time is quick.

I think that the defrag sorted out the general smoothness of the system and cut down on the errors. However, I am sure that the very slow boot time was due to the bloated Skype 3.0. It does after all load about 30 MB of data to RAM. So if you are experiencing the same problem try that. I am a bit slack in the defragging department and this has shown me that I really should make the effort to do it at least once a month. Problem is that I never have the time or I think that I don’t. But the overnight idea worked a treat. One thing I did do was disconnect the Ethernet cable. I just don’t like the idea of the PC sitting there all night connected. Seems unfounded but that’s me.

I have listened to a few more Skypecasts since the post and I have really enjoyed them. There are however massive problems with the servers. Before Skype 3.0 came out Skypecasts did not seem used that much. Then Skype 3.0 hits with Skypecasts built in and all hell breaks loose. But a button in front of a user and what happens? They press it of course.

So the Skypecast servers get inundated with new users and they are failing. They obviously have not scaled the servers for this type of traffic and the system is struggling to cope. That’s not to mention the idiots that are in there. I think this will improve though and they should be a blast just be patient with the reliability of the servers.

I have done more networking and meet some amazing people listening and participating in Skypecasts than I have in the last month. I even meet another Aussie podcaster. Listen to his latest cast on Open Source Applications, his podcast is called style:guide which he describes as:

“… a guided tour through the world of design from web sites and print design to video and music, and all other types of design in the world we live in today.”

He has 6 episodes in the can, good work. I reckon the first one is the hardest. It is great to have a fellow geek on the Skype list in Australia and a podcaster to boot. We have traded tips and helped each other out a bit and it has been fun.

The Internet continues to inspire me and surprise me. Nice header, can you do anything about mine Tim? 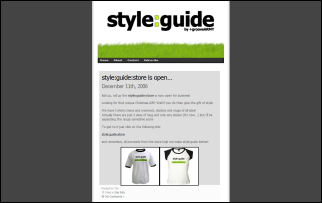